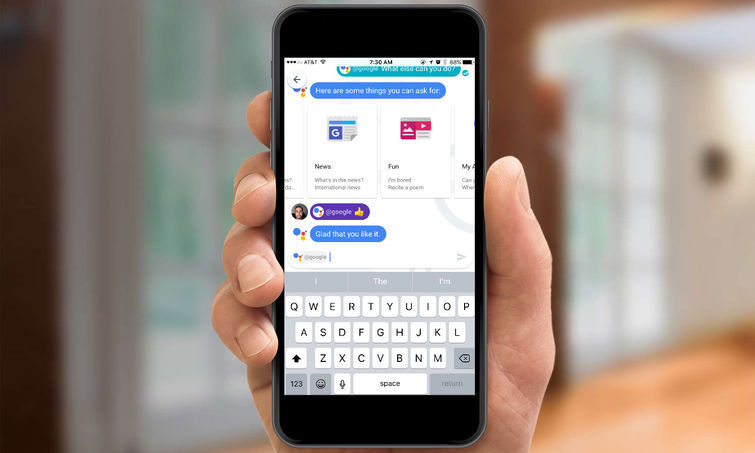 With the launch of Google’s Allo, a “smart” messaging app, users are exploring the new and improved world of chatbots. Google Allo works like many other messenger apps, but there is no need to create an ID. In fact, all you need is a phone number.

Allo links to Google Assistant. Users can type in their question and Allo will search for the answer in a similar way to Apple’s Siri. Allo differs however, as messages are typed, not spoken.

Yes, Allo can save you time and provide users with information on request (and it will also intrude on your conversations with seemingly ‘helpful’ suggestions), but does it, and other bots such as Siri, really make all our techie dreams come true?

The answer is no, it does not. Because, in a number of situations, the UX falls flat.

Take, for example, ordering a pizza via a chatbot such as Google Allo. In the app, you might select the pizza you want, confirm or add your address, add any extras, confirm payment and receive confirmation that the pizza is on it’s way. If details are already saved into the app, very little effort and few taps are required.

Compare that to having to physically type to Google Allo for example. Currently it is not as easy as typing, ‘order me a pepperoni pizza’ and having it delivered to your door in 30 minutes. Even if it does eventually become this easy, many would struggle to trust it. How do we know the bot has the right address? How do we know the bot has our correct payment details? Will it give us the option of adding extras? We cannot be sure of these without typing subsequent questions, far more effort than simply having the options laid in front of us, in an easy to read, well-designed pizza delivery app.

Do people actually use bots?

Well how often do you use Siri? At this stage in the game, most people would rather check the weather app on their smartphone, than open up Siri and ask him themselves. Whilst this will likely change, the current status of bots is that they do not receive the same love and attention from users that mobile applications do.

The current status of bots is that they are not intuitive. We do not know what works, and we do not know how to get the best out of them. We cannot know, without long-term, potentially frustrating use. Siri is still growing, Apple are pouring huge amounts of resources into advancing the virtual assistant, yet 70% of iPhone users admit to using Siri only sometimes or rarely.

Why is this? Well, Business Insider argues it’s all to do with the context. People tend to only use voice assistants when they’re alone or in the car for example. Essentially, it seems people don’t like to be seen talking to their technology. There’s something unsettling about it. Something a bit nerdy, a bit ‘computer-geek’.

Whilst the undeniable skill and time invested into developing these bots is huge, the average smartphone user may struggle to appreciate this. At the end of the day, they just want to be able to order a pizza without looking like a fool in front of their friends. Until users are confident that bots will understand their every word, and everyone is using them freely, it’s unlikely we will see them used openly in public space in the same way apps are.

Even the simplest of bots is extremely complex and expensive to engineer. Their rather limited user testing means that developers and users alike do not yet know what works in the world of bots.

So, it seems apps provide a more stable platform for start-ups and brands to unleash their creative energies. Mobile apps provide far more opportunity to build a community of users, and currently offer a far better user experience than bots.

But we cannot deny that times are changing and the key here is adaptability. Entrepreneurs will need to work extra hard to ensure relevance and market fit. There is no longer space for low-quality, advert clogged apps. We no longer want a quick boredom fix to eat up our phone storage and bombard us with popups or compulsory in-app purchases.

Whilst arguably, apps are, at this stage a better platform for start-ups and enterprises, we, mobile app developers included, need to become aware that as technology advances, the apps we design and develop will also need to. The apps will still need excellent UI and UX, and will have to be something users feel they actually need. Snapchat and Uber are still booming – as Snapchat fills a hole in our selfie-deprived lives.

Most importantly, however, future apps will need to be able to work in conjunction with bots. Together, mobile app developers and their clients need to ensure the apps they do produce are of the highest quality, and can be adapted to work alongside the growing technologies.