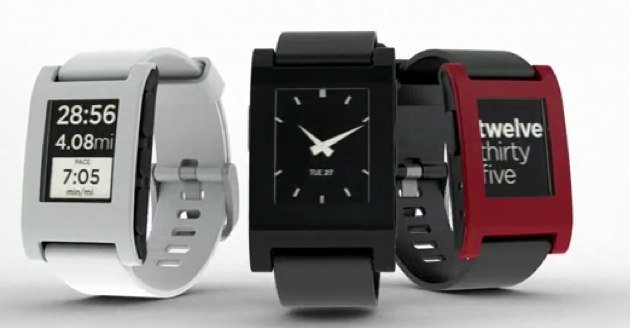 This is probably the most stylish piece of wearable tech that is currently available on the market. It has a black and white e-ink display which makes the information on it clear to read, and great to look at.

It is useful because it can connect to both iPhone and Android, and can receive messages from both. It features an accelerometer, which means it can be used as an activity tracker.

This is widely regarded as the best smartwatch currently on the market.

You can buy it fromgetpebble.com

This in many ways is like most of the other fitness trackers on the market. It will count your steps, and your sleep. You will learn how many calories you are burning from exercise a day, and will give you a step target to try and meet every single day.

What sets this apart, and makes it really cool, is that unlike many rivals it actually looks good on the wrist. There are no displays, it isn’t very big, and to most people it will just just look like a bracelet.

You can buy it atjawbone.com.

While this product hasn’t been announced yet, most industry experts agree that it is almost certainly coming in the very near future.

We have seen severalrumored designs, and with Apple’s track record it is almost certain that the iWatch will be one of the most beautiful connected devices on the market.

This will no doubt explode the wearable tech market, and will be the must have cool gadget (just like every other Apple product), so when it is announced you are going to want to move quickly to pre order your version.

When it is announced (probably in September), apple.com will be the place to go to buy.

In terms of futuristic looking wearable tech, they don’t come much cooler looking than this. It has all the style that you would expect of a Nike product, and it works great too.

The biggest selling point is how simple it is. You are given an allocation of Nike Fuel every day, you gain more by exercising, and lose it by eating, so you can easily keep on target with your fitness goals.

What makes it even cooler is that it uses LED lights to give you a quick and easy way to see how you are doing. The colors change the closer to your goal you are.

You can buy it atstore.nike.com.

This is the choice for the millions of people around the world who own a Samsung Galaxy phone. It looks cool, and it is designed to interact with the Samsung Galaxy, so it will work better than any other smartwatch with that piece of technology.

It replaced the Gear 1, and is widely regarded as a significant improvement. It runs on its own operating system, one that is specifically deigned by Samsung. So if you want a fast, responsive, feature packed smartwatch, then this is certainly a great choice.

Apple TV Mark 2 – All about the Apps

iTunes already offers a movie download service and Apple TV itself already has a core interface. A potential upgrade could see, if not a game changer, then at least a mover and shaker in the industry. Analysts, journalists and industry insiders have already pointed to the lack of 3rd party support for Apple TV as a negative and, with so much offered by built-in smart TVs the next gen TV must have something special up its sleeve to make headlines.

This week has been a busy one for Apple. We had reported earlier of their decision to allow ads to be blocked on Safari on iPad and iPhone and the potential impact that could have but the biggest Apple news of the week was always going to come from the Autumn Apple Event which took place Wednesday.

At yesterday’s Oculus Connect Conference the news we have been waiting for finally arrived. The launch date of the much vaunted Oculus Rift headset has been announced, sort of. The firm, which is owned by Facebook, has given a projected Q4 release of the VR headsets that are poised to change the way we view entertainment.