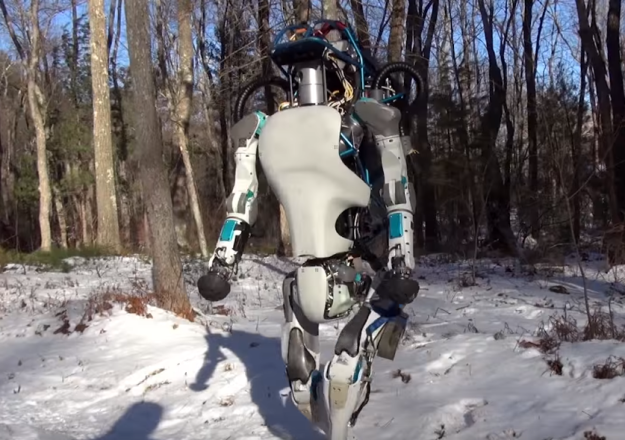 Boston Dynamics, a robotics company which originally spun from the Massachusetts Institute of Technology (MIT,) and is now wholly owned by Google has released the latest version of its bipedal robot Atlas. Atlas, aptly named from the Greek legend of the Titan who holds up the world, is a robot that is programmed to complete its manual function no matter what.

The company has released a video showing the team pushing, prodding and hitting the robot, even causing it to fall down, however, it still gets up and plods on to complete its task.

A robot that doesn’t stop until it achieves its goal? Now where have we heard that one before? Yes, it does sound a bit T100 but, fortunately, we are some way off Terminator and Skynet as the application shown was just loading and carrying boxes. Still, Atlas completed its task without paying heed to the ‘bullying’ antics of the BD team which goes to show you can’t keep a good robot down?

But what of the future?

Boston Dynamics doesn’t hide the fact that many of its “advanced robots with remarkable behaviour” are designed with military applications in mind. You can easily see a robot able to carry a load and get up and go no matter what (one video scene showed Atlas navigating snowy terrain) could have military use such as carrying supplies and cargo and relieving soldiers’ pack burden for instance.

On the domestic front, the type of role that we see being performed here by Atlas is perfectly suited to warehouse work or heavy lifting roles such as in the construction industry. The fact that Atlas doesn’t need to stop for a tea-break or take vacations is likely to pique employers’ interests. It is likely that in the not-too-distant-future we may see employment legislation come about relating directly to robots such as a maximum cap on robot usage.

All in all the latest development by Boston Dynamics is an intriguing one. Just last year at the DARPA challenge it was highlighted that robots cannot yet open doors so the advancements are clear and they are often.

Interesting too, is that Google has amassed itself a number of companies that are involved in the general sphere of tech advancement such as its DeepMind AI program. And, while the combination of advanced AI and robotics have been hot topics for both doomsdayers and Sci-Fi lovers for generations the feats are no less remarkable.

So applause is due for such rapid technological advancement as displayed by Boston Dynamics and bankrolled by Google. The future may be closer than we think.