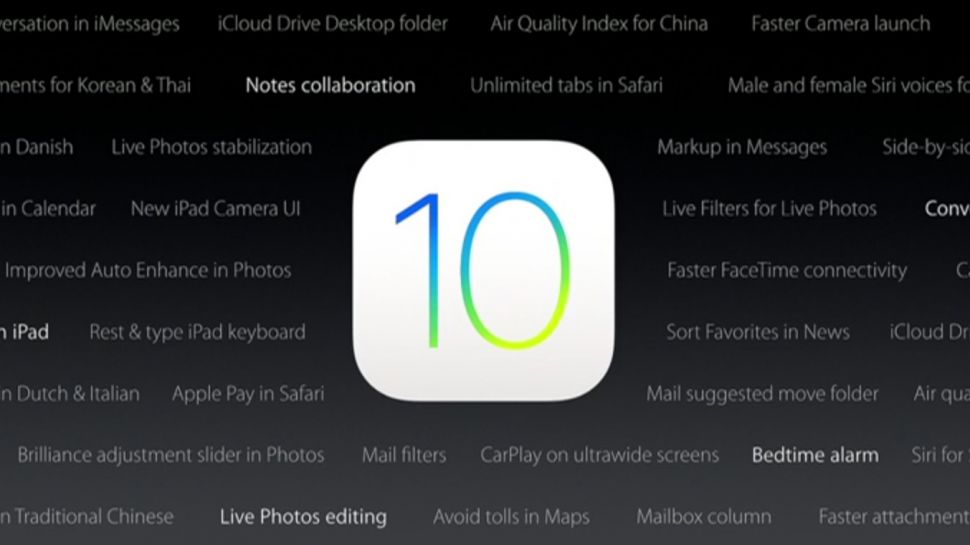 Way back in June, we wrote a blog post on some of our predictions for the widely anticipated iOS 10. We’ll forgive you if you don’t remember this because a lot has happened since then. There was a semi-important vote, Microsoft went shopping and we all suddenly became incapable of discussing anything other than the temperature of the Central Line.

Now I won’t pretend this is the first we’ve seen of the new update. As mobile app developers we have been able to access the beta versions for, well, a while. But we thought we’d do a big roundup of all the new features, then spend the rest of the day bullying Siri.

The iPhone 7 will come pre-loaded with iOS 10, but in case you really can’t wait to get your techie mitts on the new features, it’s now available to download on the iPhone 5 and later.

Here’s the new features to explore, and our app developers’ (honest) opinions…

Improvements to Siri were long overdue as randomly hearing his voice emerging from the depths of your bag is both psychologically and emotionally draining. iOS 10 has given 3rd party apps access to Siri meaning we can use our little robotic friend to access data within WhatsApp, Skype, LinkedIn and Pinterest, among others.

Siri is also far more intelligent which is a relief. He can suggest locations, understand us even when we don’t talk to him like a robot, and can even order you an Uber. We love it already.

Another huge change to iOS 10 is the Home app, which ties together all household devices. To be used alongside Apple’s HomeKit (set to rival Amazon Echo), the Home app offers an easy and quick way to manage connected household products. Users can control lights, door locks, alarms and blinds, and the ‘Scenes’ feature allows the mood of the room to be quickly altered. Siri is also in on the action, and can interact with your home accessories so you don’t have to.

Apple Music has had a snazzy new update and is far more user friendly than the previous click-and-hope-it’s-what-you-want scenario.

Both the UI and UX have seen great improvements. The ‘For You’ tab now includes lyrics and a daily playlist and the design feels far cleaner and less cluttered.

Apple Music famously struggled to take off and perhaps it’s because, unlike biggest rivals Spotify, there’s no free version subsidized by adverts. With just 15 million paying subscribers in comparison to the 1 billion active iOS devices, we don’t think Spotify need to panic just yet, although these new improvements potentially could boost numbers.

The Slide to Unlock feature has been removed. This originally seemed like a good update until I remembered half way through downloading iOS 10 that my home button doesn’t actually work, meaning the fabulous new Rest Finger to Unlock feature is actually more of a hindrance. However, the rest of our app development team seem confident this is a good move on Apple’s part.

Instead of pushing a button, users can now simply lift their phone and it’ll wake up. Although app designer Cristiano has tried this multiple times with little success. We think he’s just not lifting vigorously enough.

Responding to messages and notifications is also far easier now as it can all be done without leaving the notifications screen. There is no more hunting around for specific apps to check notifications, messages can be read and replied to far quicker, and this even includes third party apps like Uber and Apple Home.

The control centre has also been decluttered and split into several panels.

There are too many updates to list, but we will give it a go anyway (you’re welcome).

When sharing links, a piece of the article will now be pulled into the message in the same way it is on Facebook or Twitter. This is a great update in our opinion, as there’s nothing worse than using valuable data loading an article which turns out to be rubbish.

Emojis are now 3 times the size and will be incorporated into predictive text (are emojis the language of the future? Perhaps that’s a question for a separate post). Messages will be scanned and words highlighted when your phone thinks you may want to use an emoji instead. Although this is more effort, there’s simply no denying that it’s more fun…for 14 year olds.

Bubble effects can be added to our messages and we can also write in ‘invisible ink’, meaning the message is blurred until swiped with a finger. We struggled to see the point of this but supposedly it’s to delay gratification of a nice surprise message. Oh Apple you are such a tease.

We can also now send handwritten messages, although if we’re going to go there we may as well just reintroduce handwritten letters where the delayed gratification is roughly 3 days (Royal Mail dependent).

The best update to Apple Maps is that we can now scroll ahead on a route as until now, Maps would spring back us to our current location. Maps also allows us to explore nearby points of interest and informs users of bad traffic. If Maps knows users usually go to work at a certain time, it can make a suggestion for routes based on live traffic conditions.

Although we love this new update, as traffic is something we complain about on a daily basis, Google Maps is still the clear winner.

Occasionally we forget that the primary purpose of a phone is to, well, talk on the phone and Apple are making it easier and easier to avoid doing this altogether. Transcriptions of your voicemail are available on the voicemail tab, meaning you don’t actually have listen to anyone’s voice, and it will also warn you if incoming calls are ‘Possible Spam’.

The day we have all been waiting for! Whilst unwilling to accept that certain apps were, well, shit, Apple have done the right thing and allowed us to delete them. This will open up an extra 150MB of storage space which is undeniably meagre, but just think of how clean and empty our home screens will look!

Remembering where you have parked your car

If you’ve ever been reduced to tears in a multi-storey car park after a desperate hunt for your car, before concluding (with some relief) that someone must have stolen it and it’s not just you being ridiculous, then this new feature is for you.

Apple Maps now knows when we disconnect our phones from the car’s Bluetooth, pinpointing the exact location of our car on a map if needed. It can even tell us which level of the car park our car is on. If this isn’t one of the best things Apple have ever done for humanity and my emotional well-being then I don’t know what is.

For iPhone 6s, 6s Plus and SE owners, the option is now available to take RAW images, where no information is compressed, allowing more room for editing.

Whilst they didn’t mention this in their WWDC, it’s great news for all aspiring photographers who don’t want to spend all their money on the iPhone 7 Plus (wise).

RAW image shooting is available via the rear camera and, although RAW images use a huge amount of storage, remember that we have created an extra 150 MB from deleting stock apps. Win, win.

Finally there is a way to ghost that one needy friend without ghosting all our friends. With the old software we could only universally disable or enable read receipts, but it can now be done per contact. ‘Sorry I only just read this’ is a viable excuse once again.

Another feature that has a nice thought behind it but is ultimately useless is the alarm clock update. iOS 10 allows us to set our phones to remind us when it’s time to go to bed. I can’t say I’ve ever actually forgotten to go to bed before, but I can’t speak for the rest of you.

iOS 10 can be instructed to optimise our phone storage, saving hours of scrolling through pictures and songs trying to choose which ones to sacrifice. With no emotional attachment to anything, iOS 10 can remove files from your device that haven’t been accessed for a long time, no excuses. The photo of 15 year old you and the love of your life? Gone.

Hooray! Potentially the most pointless app of all time is no more. Game centre has been removed from the default stock apps after results showed that less than 1% of iPhone users actually used it. All they have to do now is bring back the headphone jack and users will love them once again.

Teenagers rejoice! The day is coming when we will communicate solely in emojis and Apple are getting the ball rolling. They have added 72 new emojis including a male version of the ‘sass’ emoji, a weightlifter emoji and a gay pride flag. There’s no avocado emoji yet though and I am planning to write a strongly worded letter to Tim Cook.